Hey everyone! Hoping everyone’s week got off to a good start! I have to work a few days this week as well as prepare some more stuff for my big move-in day later this month. But aside from that I am just trying to stay busy, get outside as much as possible, and soak up these last few weeks of Summer.

Today I have the first post in my new “Focus On” series! If you don’t know exactly what I’m talking about you can get some more information here and here.

Based on your comments and requests, the first topic I am going to cover is Raw Foodism.

Note: I am not a medical expert or nutritionist. The point of these posts are not to advocate for or discourage the food trends that they will cover. They are purely to provide some basic facts that are concrete and create a clearer picture of what these diets all are about since there is usually a lot of confusion surrounding them. They are here to serve as a reference if you didn’t quite understand these eating styles beforehand. 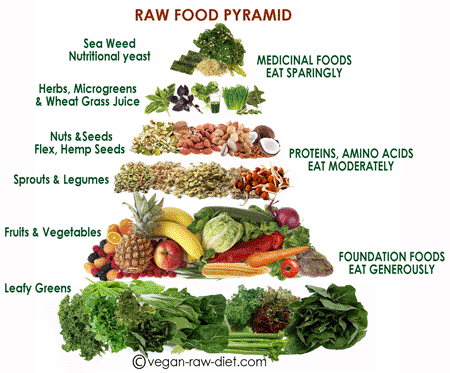 Raw foodism is the practice of consuming uncooked, unprocessed, and often organic foods as a large percentage of the diet. It revolves around the consumption of raw fruits, raw vegetables, and in some cases, raw grains. Raw foodism can include any diet of primarily unheated food, or food cooked to a temperature less than 104 °F to115 °F. The most popular raw food diet is a vegan diet, but other forms can include animal products and meat. Raw foodists can be divided between those that advocate raw veganism or vegetarianism, those that advocate a raw omnivorous diet, and those that advocate a 100% raw carnivorous diet.

Where did it originate?

Obviously, early humans ate raw diets before fire was in use and before cooking food became a common practice. However, its origins as a dietary theory can be traced back to the 1800’s. It gained popularity in 19th century Europe among the people who had connections to the ‘back to nature’ movement. Advocators of this dietary philosophy could be found all over the world from Father Sebastian Kneipp in Germany who promoted diet as nature’s cure for disease, to Sylvester Graham and John Harvey Kellogg in America. It was first used a ‘health treatment’ in 1930 by Dr. Maximilian Bircher-Benner of Switzerland, who considered food in its most natural state to contain a life force with healing properties. He discovered he could cure his own jaundice by eating raw apples. Thus began a series of experiments testing the effects of raw food on human health, and from there the diet has continued to evolve.

Where is it popular?

It is most prevalent in Australia and the US with small pockets of popularity in the UK and Germany.

When did it gain popularity in the United States?

Unlike the low fat craze of the nineties, the explosion of the ZONE diet, and the millions of ‘Weight Watchers’ out there, the raw foodism movement doesn’t have a clear cut era in which it gained popularity. It has, however, over the past few decades become much more prevalent due to it’s connections to high society. Celebrities especially have been key in expanding raw foodism in our society. Raw food restaurants have shot up around the country and with it’s reputation for being trendy (and often times expensive), raw foodism has become synonymous with a wealthy lifestyle.

[map of raw food restaurants in the US] After reading through a lot of great information, I still pretty much maintain my opinions on raw foodism that I went in with. And its pretty much the same opinion I have for all the ‘restrictive diets’. There is no doubt in my mind that raw foods have benefits…I myself eat a ton of raw foods everyday! But personally for my best health, I believe in a diet of whole foods in moderation from each food group prepared in a variety of ways.

For an intriguing perspective on Raw Foodism from an actual raw foodist check out this article! Its an interesting take because even though the author follows a raw foods diet he does not believe in the extremes that some followers take the diet to.

Also, this article creates a list of the idealistic vs. realistic principles of raw foodism! Very interesting.

I hope you found this informative! It definitely was a lot of work but I hope it helps at least one person out there gain some new information/perspective! I would love to here your thoughts! So go ahead…get your discussion on in the comments!

Are you a raw foodist? What are your thoughts on this type of diet? Favorite raw food? (<-had to have a fun one in there!

Just an extra little tidbit: After doing the research for this, I really realized how easy it is to find an argument for literally any diet philosophy out there! You will find just as many supporters of a certain diet as you will for opponents of the same eating style. Just goes to show you have to do whats right for you and not just jump on any old bandwagon!

16 responses to “Focus On: Raw Foodism”