Anyone else love this show when they were a kid???

I always begged my mom  to get the books that the other kids on it were reading! Something about another kid recommending something made them so appealing….maybe that was the trick after all?!

Anyways, I guess I am doing my own sort of Reading Rainbow today in that I wanted to share with you two reads I have LOVED lately. Surprisingly, these books came from a course I take at school! It’s pretty rare that I really enjoy a ‘required’ reading assignment (something about being forced to do it and being under time constraints takes away from the fun of it!), but this semester my Disease and Medicine in America class has felt more like a cool seminar that I get to go to every other day, rather than actual class (aside from all the hard tests and essays that is! 😉 ).

Being part of the Honors program means I have a lot of extra work and requirements, but one of the perks is that I have the opportunity to take more unique courses…ones that fall outside of my major requirements! In fact this Disease and Medicine course has peaked my interest so much so that it’s helping me figure out what I want to do when I’m older. I am just so fascinated and literally hang on every word my professor says during class! I am thinking that for grad school I may want to get a masters in public health to combine with my undergrad degrees (international relations, political science, and law & public policy) and then try to work for the government in public health legislation! Kind of a specific goal, but at least I have some direction now!

Okaaaay, enough school talk! On to those books! Not really, light-hearted, beach reading…but if you’re looking for something that’s informational as well as REALLY interesting and enlightening, then check these out!

This book is about the Polio epidemic that America faced during the 20th century and the release of contaminated vaccines that were distributed to the public in 1954 due to a mistake on behalf of pharmaceutical companies who were under pressure to get a treatment to market quickly.

I found this book so interesting because I had no idea how devastating polio was to our country before reading it! I of course knew about President Roosevelt’s connection to it, but I had no idea of the magnitude to which it affected the public and how it truly was an “American disease”.

The book also exhibits how the release of those contaminated vaccines from the pharmaceutical companies defined the attitude and relationship that the public has with the medical industry today. The incident opened the doors for the beginning of major lawsuits against the medical industry and decreased the public’s confidence in the safety and effectiveness of medical treatments out on the market.

My overall impression from reading the book is that we are a sue-happy culture and our quick tendencies to charge the medical industry for negligence (when it really isn’t warranted) has halted their potential to bring useful treatments and potential disease cures into the public domain.

Dr. Paul Offit offers amazing insight into this issue an brings up some great thoughts on what the future of medicine in America holds! 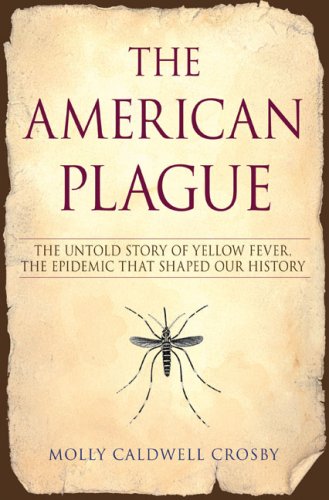 This book is about the most devastating outbreak of yellow fever in the United States that took place in the 19th century. It begins by going into great detail about the conditions that lead to the specific outbreak in Memphis, TN and then broadens to highlight how this epidemic and the subsequent outbreak during the Spanish-American war nearly two decades later catalyzed the nation’s search for a the cause, prevention, and vaccine for yellow fever.

What I really like is that Caldwell relays a lot of great historical information, but does it in a way that makes it feel like a story rather than just a chronological compiling of facts. She draws you in with your senses and allows you to feel, smell, taste, and experience not only what it would be like to live in a world ravaged by yellow fever, but also how confusing and difficult this disease was to combat.

The book is broken up into 3 parts: the epidemic of Memphis, the fight against yellow fever to protect troops in the Spanish-American war, and the lasting legacy of yellow fever (as well as its potential for resurgence in our modern world!! SCARY.).

Overall, a very enlightening read that really exemplifies the fact that up until the 20th century we were pretty clueless in terms of modern medicine. All the progress we’ve made in this field is very ‘new’ in regards to time…it’s crazy how far we’ve come since the discovery of germ theory at the turn of the 20th century and over the past 50 or 60 years!

Let me know if you end up checking these books out!!

Another book I really enjoyed this semester is The Bell Jar by Sylvia Plath!! This one is a little more commonly read…have any of you read it?! I wanted to let you know that unfortunately the interview I did with the GriffinTV crew (my campus’s TV station) won’t be airing. The footage got corrupted somehow upon transferring it from the camera and thus the segment was able to be used. 🙁

Bummer! But I was definitely flattered that they wanted to feature me at all!

Still looking for submissions for tomorrow’s Lend a {Healthy} Hand round-up!! It’s gonna be a really important post because I’m announcing a new project/contest I have for you all! So be sure to check it out! 🙂

Do you prefer fiction or non-fiction works? I usually like fiction…but these non-fiction books have been GREAT lately!!

Tell me one of your favorite courses in school? Any that you were surprised you enjoyed?

Todays’s Healthy Help: Went around the house and collected recycling for tomorrow’s pick up!

Never too late to start Lending a {Healthy} Hand for this weeks round-up! Tell me what you’ve done to help someone else lately!